Testing brake fluid on a refractometer is simple and straightforward. Just add a drop of brake fluid from the master cylinder or wheel cylinder on the measuring surface, close the sample cover, allow a brief period for the temperature to stabilize, and press the <GO> button. The refractometer will quickly display your measurement of water content or estimated boiling point.

As part of the regular maintenance interval, many automobile manufacturers recommend routine brake fluid inspection. However, there was never an easy, inexpensive means for testing it; until now. A Brake Fluid Refractometer represents the most precise field testing means available to determine the water content and estimated boiling point of automotive brake fluids.

No Brakes – The Dangers of High Water Content in Brake Fluid:

A dangerous condition exists when brake fluid boils in the braking system; it can feel like air trapped in the braking lines. In extreme cases, the driver may push the brake pedal entirely to the floor without slowing or stopping the vehicle. In colder climates, brake fluid with high water content becomes thick, causing slow pedal response or difficulty braking. Moreover, as the water content in brake fluid increases, it will become more corrosive to steel pistons and the ABS modulator.

Even New Cars Contain Water in Their Brake Fluid!

The Result is Catastrophic Brake Failure!

Brake fluid with high water content has a reduced boiling point. That means that the brake fluid will boil in the wheel cylinder at a lower temperature than specified. When traveling down a steep grade, towing a trailer, or in the event, a brake pad becomes stuck against a rotor, brake fluid temperature can increase high enough to boil if it contains enough water. In the case of boiling, stepping on the brake pedal will now only compress the vapor instead of applying hydraulic force to the pad – the result is sudden brake failure.

When Should I Change my Brake Fluid?

Generally, the type of driving should influence when to change brake fluid. If the vehicle is used for towing, driving in mountainous regions, driven at high speeds or has ABS brakes, it would be best to change the fluid at 2% water content. All vehicles should have the brake fluid changed when the water exceeds 3%. 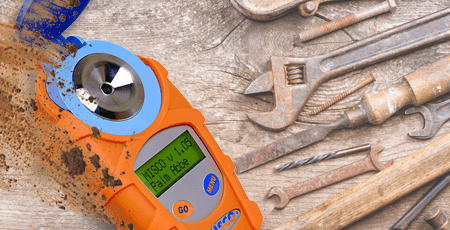 The MISCO Palm Abbe™ Refractometer is the Toughest, Most Precise Digital Refractometer Anywhere! Nowhere else will you find a refractometer that matches the mechanical strength, structural integrity, and operational muscle! Rugged and Precise in one package. 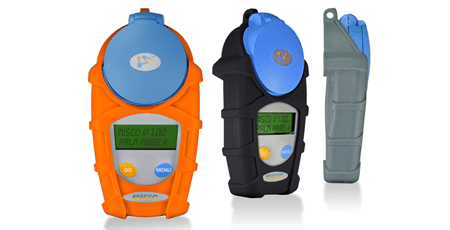 The OPTICAL-ENGINE® powers every MISCO Digital Refractometer. At its core lurks a powerful detector array, with 1,024 high-definition elements, not the usual 128 element low-definition array commonly found in other brands.

The Power of Resolution

The MISCO Digital Refractometer boasts 87% more detector elements for more than 8x the resolution. The difference is similar to a 2.5-megapixel camera vs. a 20-megapixel camera. The net result is 2x to 3x the measurement precision of competing refractometers. 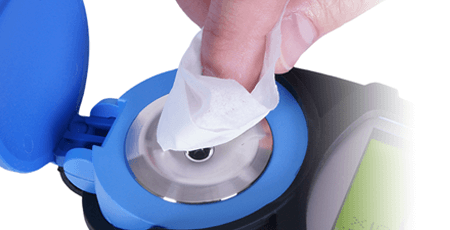 Second, only to diamond, sapphire optics provide a virtually scratch-proof measuring surface. With 4x the thermal conductivity of ordinary glass prisms, sapphire also improves the speed and accuracy of temperature correction. So why do competing refractometers use glass prisms? 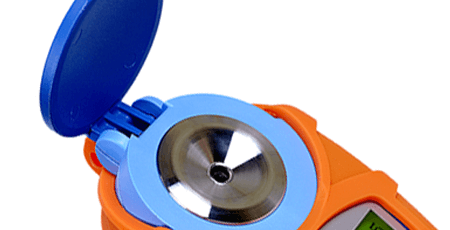 The shallow sample well is constructed from polished stainless steel, not aluminum or plastic, like others. No other refractometer is as easy-to-clean. A protective evaporation cover prevents evaporation and protects the measuring surface. 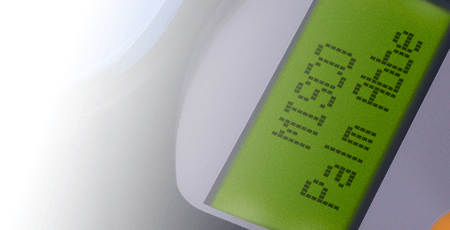 A large, easy-to-read 24-character by two-line backlit LCD shows both the unit of measure and the reading value for each measurement. Compare this to the typical three “digit” unlit display on competing refractometers. 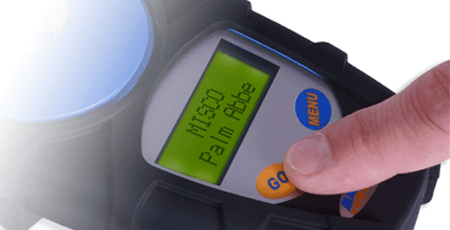 It's Ridiculously Easy. Place a drop or two of fluid in the stainless steel well, close the evaporation cover, and press the <GO> button. Within seconds, the refractometer displays your measurement in your selected unit of measure. Nonlinear temperature correction is automatic and ensures accurate readings. 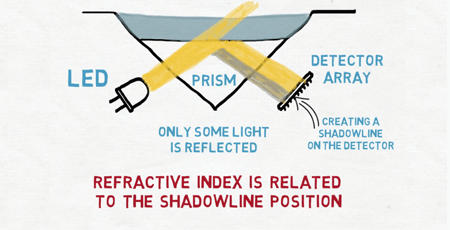 How Does a
Refractometer Work? 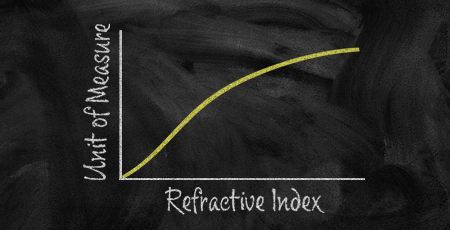 The MISCO digital handheld refractometer can be factory programmed with tens of thousands of scale combinations from the most extensive refractometer scale library on the planet. What is a scale? Think of it as a unique program that converts refractive index into your measurement units of choice for your particular fluid. 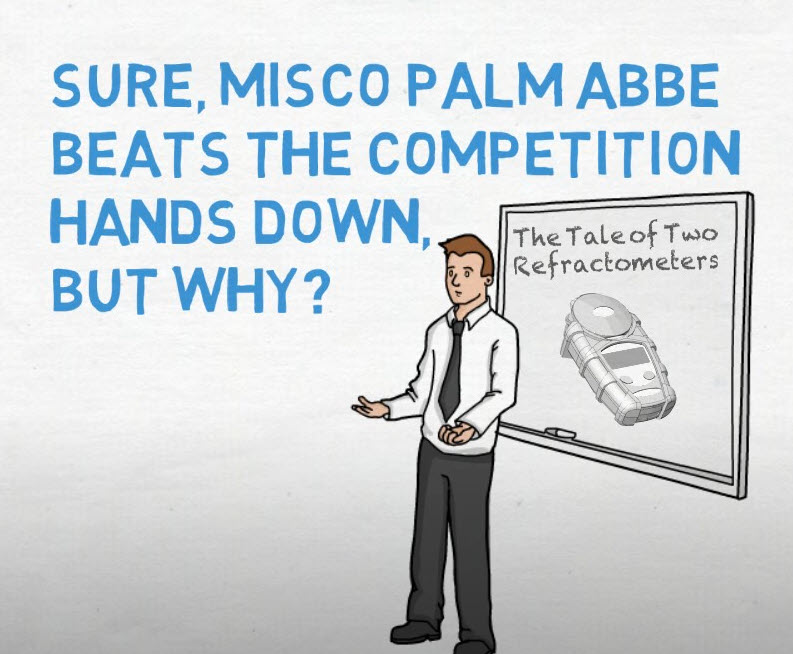 MISCO Refractometers are made in the USA!

Easy Order: Here are a few of the most popular Scale Combinations and Refractometer Models. If you require different programming, you can mix and match scales through the Flexible Custom Programming section below, or call customer service for assistance: 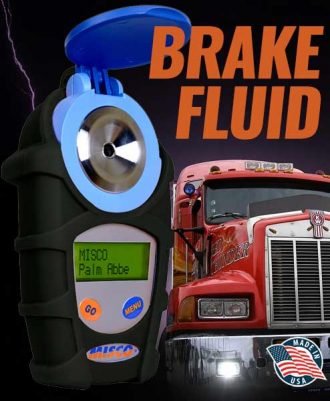 MISCO Palm Abbe Digital Refractometers can be custom-programmed with up to 5 scales to your exact specifications. There are two easy online options to create your customized units from hundreds of measurement scales:

“Build Your Own” Tool

The above scales are also available on any MISCO inline process refractometer or concentration sensors. They are made for continuous concentration measurement of process fluids.

MISCO has the most extensive refractometer scale library on the planet. Don't see what you want? Browse by handheld refractometer model or by refractometer application. Or give us a call. We can help!
Inline Process Refractometers
browse Handheld Models Browse By Application

From our Q&A Forum

When to Change DOT Brake Fluid

How do you know when to change DOT brake fluid?

It is generally believed that a moisture content of less than 2% is safe for most driving conditions in most parts of the U.S. Conventional wisdom says that a moisture content of 2 to 3% is marginal and that it should absolutely be changed at 3%. You should consult your vehicles owner’s manual or vehicle manufacturer for their recommendations with respect to your specific car. A car generally absorbs about 1% moisture per year of service life. Many motor vehicle companies recommend changing brake fluid every 12-months, others recommend changing every 24-months. The amount of moisture that brake fluid absorbs depends on a number of factors including the type of fluid, humidity, type of brake hoses, condition of the seals and mileage.