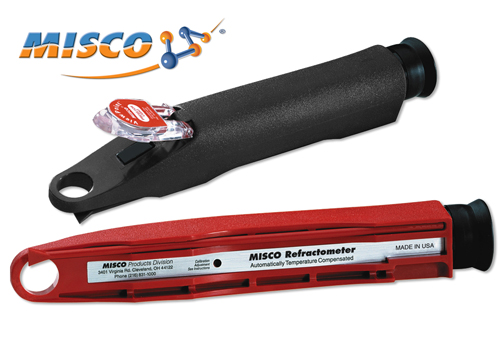 Different models of traditional analog refractometers have different internal scales on which to read fluid concentrations. Some instruments have specialized scales that indicate the exact mixture of the sample being tested, while others have an arbitrary unit of measure that works like a shorthand for refractive index measurements.

The instruction manual that comes with each refractometer carefully explains the procedure for comparing refractometer readings to the actual known concentrations or properties of your specific fluid. Trained MISCO technical support engineers are always available to assist you at any time.

How to Take a Reading With a Traditional Analog Refractometer

MISCO refractometers are easy-to-use and require little or no training. They can be mastered by ANYONE in just minutes.

How a Traditional Analog Refractometer Works

The refractometer focuses this bent light on a tiny internal scale. The scale is magnified by the eyepiece lenses so it is easily visible.

The optics are supported by a bi-metal strip that moves lenses in response to temperature changes, ensuring that readings are accurate regardless of temperature.

Hello, I am looking for a handheld portable device to measure the % mass ethylene glycol in a glycol / water solution. Thanks.

Can the Palm refractometer be used to check Trieythelene Glycol?

The Palm Abbe digital refractometer is ideal for measuring urea concentration. There are scales to read Molarity 0.0 to 8.6, as well as scales for percent by weight, specific gravity, density, freeze point (Celsius and Fahrenheit), and parts per thousand. The refractometer is automatically temperature corrected for temperatures between 10 to 45 °C (50 to 113 °F). If you can’t decide which urea scale that you need, that’s ok; you can select any five scales to be programmed into a Palm Abbe PA203x. Please give us a call, customer service will be happy to help you select the scales that you need.

What is the difference between the traditional analog Brix refractometer and the electronic digital handheld for Glycol testing? What are the benefits to having one over the other?

This is a good question. Brix is a measure of sucrose content in a sucrose water solution. There is not a direct linear relationship between Brix and glycol concentration. However, there may be a conversion chart available from your glycol supplier or you can make your own (we do not have conversion charts). Our analog Brix refractometer has a precision of +/- 0.2% Brix. The analog refractometer scale is subjective, meaning that two or more people looking at the scale are likely to report different readings depending how they view the scale. You also need to bring the glycol near your face to take a reading. Brix refractometers are temperature compensated for sucrose not glycol. Lastly, since you need to use a conversion table to manually calculate glycol freeze point, you introduce the possibility of making an error. A Palm Abbe digital refractometer with a scale for glycol would be a much better choice. First, the reading is digital which removes subjectivity from the measurement. Second, you can read directly in the unit of measure you desire, concentration or freeze point. This eliminates conversion errors. Since you place your sample in a well, you do not need to bring the refractometer near your face to read it. Also, a digital refractometer with a glycol scale will have temperature compensation specific to glycol. Lastly, the Palm Abbe digital refractometer has at least twice the accuracy of an analog Brix refractometer.

Difference Between Salt Scales for Refractometer.

What are all the different salt scales used for? I need to measure salinity content but don’t know what scale I need.

Chemically, salts are ionic compounds that result from the neutralization reaction of an acid and a base. There are several varieties of salts containing chlorides, acetates, fluorides, and sulfates. The most common salt is sodium chloride (NaCl) or regular table salt. Although we have a refractometer scale that will measure most common salts, we also have an extensive list of scales for sodium chloride. You may select from scales for measuring sodium chloride concentration in percent by weight, specific gravity, freeze point, parts per thousand (ppt), g/100g, density, percent saturation, and even Baume. The most common units of measure are percent by weight, percent saturation, and freeze point. The scale that is correct for you depend on what unit of measure you are most interested in. Multiple salt scales can be programed into the MISCO Palm Abbe digital refractometer so you can just change between different units of measure as your needs change. MISCO also has scales available for the salinity of seawater.

Very interested, yet ignorant about this technology. I need reliability in testing % NaCl in water softening applications as well as concentrations of sodium hydroxide, hydrochloric acid, and sodium sulfite. Do I need multiple instruments? Can I get the meter to read in ppm of sodium sulfite? Can the meter(s) read in % saturation of NaCl? I am used to reading hydrometers for all but sodium sulfite, can the instruments give the same read out in % acid or caustic? I really do not understand the BRIX scale and how that will look when all I want is the strength of acid or % saturation of NaCl. Thanks,

There are many scales available for the Palm Abbe digital refractometer. In general, refractometers are very good at measuring binary (two-part) fluids, such as sodium chloride (NaCl) and water. Where the sodium chloride is the variable and water is the constant. For these types of binary fluids, the resolution (detection threshold) is typically in parts per thousand (ppt). Measurements of concentrations in the parts per million rage is not possible with a handheld refractometer.

As long as you can accept measurements in the parts per thousand, percent saturation, or concentration, then a refractometer would be useful for you. We have scales available for directly measuring sodium chloride (NaCl), sodium hydroxide (NaOH), hydrochloric acid (HCL), and sodium sulfate (Na2SO4), provided that your fluid is just one of those chemicals and water. If there are more than two parts to the solution, a refractometer could not discriminate which part was causing a change in the overall refractive index.

The Brix scale is a measure of the percent of sucrose in a sucrose/water solution. This scale would not be of any use to you unless you have a conversion table.

Check out our Build Your Own Page and put together scales that make sense for your full application.

I am wanting to find out if you have a handheld meter that can measure: TEG EG DEG PG MEA DEA DGA Any assistance that you can provide would be greatly appreciated.

I would like to obtain some additional information regarding your PALM ABBE PA202X-011-014 ethylene glycol refractometer. Our enquiry is related to the use of the refractometer for measuring runoff and surface waters for ethylene glycol. Specific questions are:

1. Units of measure. Does the instrument have the capability of reporting measurements in mg/L?

mg/L is a tough number to display on the refractometer. Refractometers typically measure in the parts per thousand range. Mg/L is parts per million. This is well beyond the detection threshold of most handheld refractometers.

2. What is the range (lower detection limit and upper limit) of detection of the instrument in mg/L?

3. If there is an upper range, is there a procedure specified for sample dilution?

Upper range would be 100% EG. No dilution would be necessary.

4. Are there any properties of the matrix (water) that may interfere with the analyses (e.g., suspended solids, dissolved solids, pH)?

5. What is the precision and accuracy of the measurements (+/- in terms of mg/L)? Does the accuracy/precision vary according to sample concentration?

Refractometer for Measuring Mixtures of Diethanolamine (DEA) and Water.

A vendor gave me your website to try and locate a meter that could tell me the percentage of Diethanolamine contained in a deionized water solution. We typically run approximately 25-30% DEA solution, and add deionized water or diethanolamine (DEA) to maintain this concentration. Do you provide a hand-held instrument that could analyze this for us?

Thanks for your question. The Palm Abbe digital refractometer can be programmed with scales to read Diethanolamine (DEA) from 0 to 100 percent by weight. Just place a few drops of Diethanolamine (DEA) on the measuring surface, close the evaporation cover, and press the button to get an instant reading of concentration.

When using this to test % PG in water, is it possible to get a false positive at low levels (e.g., 0.1, 0.2)? Does the turbidity of the sample have any effect?

The uncertainty of the Palm Abbe digital refractometer PA203X with a propylene glycol (PG) scale is +/-0.1%. So, if you are testing pure water there is always the possibility of receiving a reading of either -0.1% or +0.1% concentration. To minimize the possibility of an erroneous reading, you can take multiple readings and average them together. Generally, turbidity caused by suspended solids will have little effect on refractive index measurement.

We just purchased a MISCO digital salometer for measuring sodium chloride concentration. We have a process that needs to mix DI water with Sodium Chloride (NaCl) to 100% saturation. I am hoping that the meter I have bought is the correct version for this job?

The MISCO Digital Salometer is a refractometer that measures the percent saturation of sodium chloride (NaCl) salt in water. The refractometer will display the percent saturation of sodium chloride from 0 to 100% as well as display the freeze point of the solution in either Fahrenheit or Celsius (model dependent). A digital Salometer overcomes many of the problems associated with traditional analog Salometers. Traditional Salometers are cumbersome to use and time consuming. They are simply a glass or plastic hydrometer with a special scale that displays degrees SAL instead of specific gravity. In use, the traditional Salometer is floated in a graduated cylinder containing salt brine. The reading is taken at the point at which the surface of the fluid crosses the analog scale divisions; the temperature must then be read with a thermometer, followed by a manual temperature correction of the reading.

There is no method for field calibrating the apparatus; it is difficult to resolve the tiny scale divisions; it must be thoroughly cleaned and dried to prevent salt residue from influencing subsequent readings; and it is easily broken. The MISCO Digital Salometer is much easier to use and much more accurate. Simply place a couple of drops of sodium chloride solution on the measuring surface, close the evaporation cover, and press the button to initiate the readings. The percent saturation is displayed nearly instantly on the large LCD display.

We have a pool with 18% salt (a mixture of NaCl, CaCl2 and MgCl2). Is there a digital device [refractometer] that can measure the % of salt in the water?

The Palm Abbe refractometer does have scales for binary solutions of sodium chloride (NaCl), calcium chloride (CaCl2), and magnesium chloride (MgCl2), but cannot measure a mixture of all three.

How to Measure Calcium Chloride with a Refractometer.

I’m interested in testing calcium chloride (CaCl2) at a 30% concentration. This would be to verify identity of totes. Is this possible with a refractometer?

No problem. Our Palm Abbe digital refractometer can measure the percent concentration of triethylene glycol (TEG) in your dehydration system from 0 to 100 percent (+/- 0.1%). You can choose a scale for TEG percent by concentration or TEG percent water. The oil contaminate should not be a problem because the refractometer only measures in the parts per thousand (ppt) range, not in parts per million.